Well, as usual its been a while since I have updated this blog. I got some acrylic nails put on at the beginning of summer and ended up not sticking with them. They sounded great for regular fingerpicking, but i could not make them work for clawhammer banjo or guitar. My index finger nail kept hitting the string below it during the downstroke. I think maybe it was because the nail was alot thicker due to the acrylic compound. Who knows, Martin Simpson uses acrylics and sounds great on banjo. I also didn’t really like the sound of the nails on the wound strings of my guitar. After I took the acrylics off my nails were pretty useless for a few months as they were very weak and thin. So I have not been doing a ton of fingerstyle playing the past few months. Hopefully that should change now that my nails seem to be back up to full strength.

I have really been enjoying this new album by John Doyle, Eamon O’Leary, and Naula Kennedy, whose group is called The Alt. Their material is oriented around more vocal songs, though there are a few instrumental tunes. Really nice playing and arranging.

Here is really cool version of Lost Indian I learned from my friend Steve Baughman. It is his arrangement, and the tuning is eCGCD. Similar to Double C, except the drone string is down to E. Give it a try. 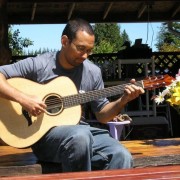